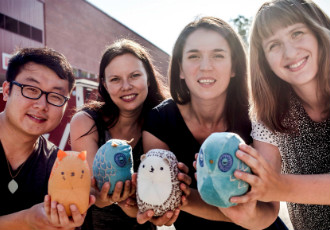 Entrepreneurship was not what Lisa Gerkens had in mind when she began studying design at Aalto University – “Honestly? Definitely not,” she says.

Yet, here she is – a member of a team of three women and one man participating in a programme organised for ambitious start-ups by Aalto University. The venture of the foursome, Leeluu, develops soft interactive night-lights to help children overcome the fear of darkness.

The business idea, Gerkens says, came out of everyday life. One member of the team is a mother, while Gerkens used to take care of her siblings, who are some ten years her junior.

Most of the people who have invested in Leeluu are women, but on Wednesday more men than women took the stage during the closing ceremony of the nine-week start-up programme, the Summer of Startups, in Otaniemi, Espoo. Of the nine start-ups in the programme, only two were led by women.

While the gender distribution may appear skewed, it is in fact more balanced than the average.

Elina Lepomäki (NCP), a Member of the Parliament and an experienced angel investor, estimates that fewer than one in ten start-up entrepreneurs in Finland are women.

According to Heikki Rannikko, a senior advisor at the Small Business Centre of Aalto University, the share of women may be even lower. Studies conducted at the Small Business Centre indicate, for example, that only six per cent of the recipients of the start-up funding disbursed by Tekes – the Finnish Funding Agency for Innovation – are led by women.

In contrast, women account for roughly one-third of all business-owners in Finland.

Traditionally, the low share of women has been attributed to their alleged disinclination to take risks.

However, Lepomäki points out that the situation may be explained by the dominant presence of the public administration in female-dominated sectors, such as the health care sector. As a result, there is little room for entrepreneurs.

On the other hand, the scarcity of women in start-up ventures may also be attributable to the fact that start-ups are usually founded on a technological invention or new software – fields of study dominated by men.