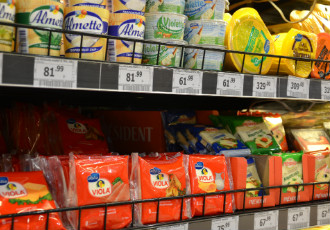 The exports of Valio to Russia will dwindle to nothing due to the sanctions imposed by the country on Thursday. “The exports will halt as of this moment. Export bans have been imposed on all of our products,” says Mika Koskinen, the head of Valio's operations in Russia.

The retaliatory sanctions are a heavy blow to the Finnish dairy giant, which derived nearly 20 per cent of its net sales in 2013 from Russian markets.

Altogether, Valio exports some 250 products to Russia, including its lines of Oltermanni hard cheeses and Viola processed cheese spreads.

The stiff retaliatory sanctions unveiled by Russia on Thursday came as a surprise to the traditional Finnish company. “The extent of it was a huge surprise. I would've never believed it could be shut down just like that,” Koskinen comments.

“Russians have talked about how they don't have enough domestic dairy products,” he highlights.

The sanctions will force Valio to identify compensatory markets for its products. Koskinen on Thursday said that Valio will convert its milk increasingly into cheese and a number of other products, such as powdered milk products.

“We won't be stuck with the milk. It can be re-directed to other markets,” he assured.

On the other hand, Koskinen also acknowledged that Valio would much rather continue selling its products to Russia. “It's a good and profitable market. The appreciation we enjoy there allows us to get a good price for our products.”

Koskinen refused early on Thursday afternoon to speculate whether or not the export ban could result in temporary lay-offs or other personnel actions at Valio.

The sum is equivalent to over 80 per cent of the value of all Finnish food exports to Russia.