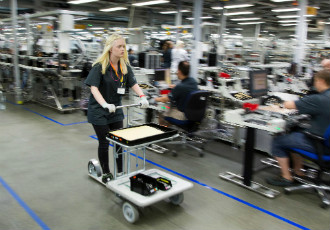 The base station facilities of Nokia in Oulu are bustling with activity.

Although the manufacturing of mobile phones has faded into history in Oulu, Nokia remains the largest private employer in the city that was once touted as the Silicon Valley of the North, currently providing employment to 2,300 people and constantly recruiting more.

“We're keeping busy for the employer,” says Mikko Herukka, while tuning a module to the right frequency.

The production facility operates in three shifts, late into the night. This year, it has ramped its output by also operating on weekends.

Ravaged by massive lay-offs, Oulu is all the more delighted with its successful companies and remains confident in the future of the last remaining production facility of Nokia in Europe, which specialises in the pre-production of new base station products.

“If this was mass production, this would no longer be in Finland. We operate in a symbiotic relationship with product development, and that provides us with a strong competitive asset,” says Erja Sankari, the head of the facility.

Sankari refrains from commenting on the lingering rumours that the facility is to be offloaded to a contract manufacturer, assuring instead that the outlook for the facility is positive. “The outlook only extends a few months into the future, and we have to justify our existence every day. We're a global company, the purpose of which is to provide results for shareholders,” she acknowledges.

Of the roughly 950 employees of the facility, 300 work in various duties around the world. The remaining Nokia employees in Oulu, in turn, work in product development. The former mobile phone giant recruited 200 new employees in the city last year and is expected to recruit an additional few dozen this year.

There is hardly a lack of applicants. Following the recent massive lay-offs by Microsoft and Broadcom, the unemployment rate in Oulu is projected to creep up from the current 18 to 20 per cent, with over a thousand technology professionals among the job-seekers.

Oulu is already referred to as “a former Silicon Valley”.

Juha Ala-Mursula, the director of economic development at Oulu, rejects such claims as misguided.

“We continue to have 7,000 people working in the domain of wireless communications technology. If you also take account of other high-tech sectors, the number will increase to some 12,000 people. I know that in three quarters' time, 200 jobs will open,” he highlights.