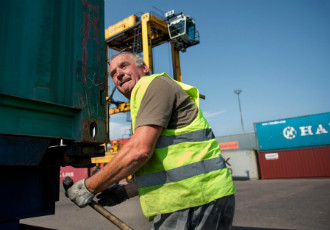 The other, sector-specific sanctions are contrastively deemed unlikely to have a notable impact on Finnish exports.

However, directors at Finnish industrial interest groups remind that the full impact of the sanctions will not be realised until the near future. “If the situation goes on for half a year or a year, Russian companies will struggle to secure funding and Finnish companies may lose orders,” cautions Kai Mykkänen, the director of Russian affairs at the Confederation of Finnish Industries (EK).

In particular, the sanctions are expected to hit the Finnish engineering and technology industries.

Jorma Turunen, the CEO at the Federation of Finnish Technology Industries, reveals that some companies have already indicated that their Russian customers are struggling to scrape together funding. To an extent, he acknowledges, the problems are attributable to the depreciation of the Russian rouble, which began already before the escalation of the crisis in eastern Ukraine.

Mauri Pekkarinen (Centre), the chairperson of the Parliament's Commerce Committee, demanded on Wednesday that Prime Minister Alexander Stubb (NCP) present a report on the sanctions' impact on the national economy.

Mykkänen agrees with Stubb in that the direct impact of the sanctions is likely to remain limited. The indirect impact, on the other hand, will exceed the value of lost orders due to the significance of Russian economic growth to Finland.

If the cycle of sanctions is not broken, Russia will slip into recession by next winter, foresees Mykkänen.

“Tens of thousands of Finns manufacture goods and sell services to Russians. If the Russian economy caves in, these jobs are at risk,” he highlights.

Jukka Palokangas, the chief economist at the Federation of Finnish Technology Industries, estimates that unless a turn for the better takes place Russia's share of Finnish exports will diminish to five percentage points in 12 months' time. Last year, the country accounted for ten per cent of Finnish exports.

At the Port of HaminaKotka, the impact of the sanctions has already been felt. CEO Kimmo Naski reveals that a few Russian export companies have selected China as a transit destination for their goods instead of Finland. “One of the reasons they've told us is that they are not prepared to risk their export operations out of fear of EU sanctions,” he says.

On the other hand, also positive developments have taken place. According to Naski, Russian and international companies have made preliminary contacts to assess the feasibility of re-locating their operations from Russia to Finland.

“These are of course very preliminary enquiries, but the situation in Russia has obviously encouraged companies to consider their options.”

Russia is widely expected to focus its retaliatory measures on sectors where it can step up its domestic production. Heikki Juutinen, the managing director at the Finnish Food and Drink Industries' Federation, says that he is “very concerned” about the retaliatory sanctions.

“We're indeed afraid of them. The situation seems to be gradually advancing toward a trade war,” he estimates.

Russia accounts for roughly a quarter of Finnish food exports.