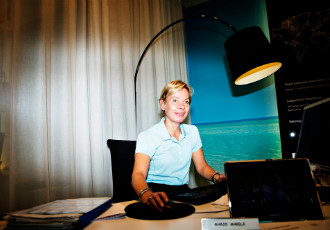 While Finland remains mired in recession, the Finnish unemployment rate crept up to 9.6 per cent between April and June, according to Statistics Finland.

Despite the bleak economic climate, more than half of Finns are not afraid of being laid off, finds a poll commissioned by Helsingin Sanomat.

Conducted in mid-June, the results of the poll are unaffected by the massive job cuts announced by software giant Microsoft in mid-July and semiconductor company Broadcom last week. On the other hand, there was not exactly a lack bad economic news in the spring.

The poll finds that overall one in three Finns are afraid of being laid off.

“The feeling of insecurity has remained high during the economic crisis. Psychology has certainly had a notable effect,” says Seija Ilmakunnas, the director at the Labour Institute for Economic Research.

Marjo Mäkelä, a travel agent at the Finnmatkat office on Mannerheimintie, Helsinki, admits that it has been impossible to turn a deaf ear to the bleak economic news, admitting that the thought of losing her job has crossed her mind. Yet, she insists that she no longer frets about news of consultative negotiations due to her experience in the sector.

Despite her optimism, travel agencies are a fitting example of a sector struggling to adapt to the ongoing structural change.

The concept of creative destruction refers to the idea that an economy will develop as less-productive companies make way for innovations and novel models of operation. “Due to globalisation, jobs are being created and destroyed faster. Markets in the digital world are typically global. The dynamics of the labour market have increased,” Ilmakunnas says.

“The overall feeling is that the worst of the eurozone crisis may be behind us,” Ilmakunnas views.