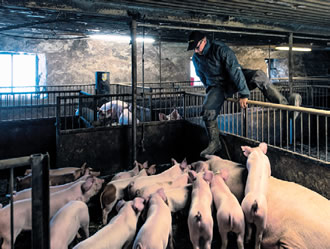 A sow that has lazily sprawled on the floor pushes itself up, as Otto Alastalo, 20, lifts up one of its legs.

The sow grunts nervously and runs around the pen with its teats shaking. When the pig squeaks, the sow responds with even fiercer grunts.

"It is motherly instinct. Someone took her child," Lassi Alastalo, 56, explains on his farm in Vehmaa.

The sow has farrowed on its own for three weeks, moving around freely. It is allowed to nidify and suckle its piglets for a month and a half until they are estranged.

This is significantly different from regular farms where pigs are usually locked in cages, and can barely move.

The Alastalos are running an organic pig farm, a rare thing in Finland. In terms of pigs, the farm of 34 sows shifted into organic production a year ago.

Increasingly fewer Finnish farms plan on doing the same. According to TNS Gallup Elintarviketieto, the willingness to shift into organic production has decreased significantly in all fields, apart from vegetable and berry production, compared to two years back. Among beef cattle manufacturers, for example, eagerness to move into organic production has dropped from 27 per cent to 17-18 per cent, and in pig farms it has dropped from 6 to 3 per cent.

According to the report it is likely that the objective of turning a fifth of Finnish fields into organic production by 2020, as written in the government's organic programme, will not be realised.

"To achieve this objective will take work," Kallinen says.

"Let us hope that it is realised," briefly states State Secretary at The Ministry of Agriculture and Forestry Risto Artjoki.

The government has aimed to increase organic farming to correspond to consumption.

The waning interest of farmers is not enough to stifle the significant growth in organic farming. For example the production of organic milk and pork may double by 2020, according to the survey by TNS Gallup. This is because all production fields still see a willingness to shift into organic production. Organic farms are larger on average, and many have plans of further expansion.

Otto Alastalo also plans to slightly increase the number of sows before the farm is passed on from father to son in March.

For the Alastalos the most significant reason for switching into organic was economic. "Organic is what keeps this farm going," Otto Alastalo states.

It is increasingly challenging to make a regular small pig farm profitable. Organic pigs yield almost double the price of regular ones, even if fewer of them are born.

Shifting into organic production involves investment costs: pig farms had to be remodelled so that animals are able to move outside and get more space. What makes it profitable is that fertilisers and pesticides are not purchased, as their use is forbidden.

The hundred hectare fields of the farm include organic barley, oat, horse bean and clover for pig fodder.

The EU agricultural subsidy will see a reformation next year, as organic and regular subsidies will be separated from each other. The organic subsidy will also be increased.

The intermediate state between the two subsidy systems is one of the reasons that may reduce farmers' willingness to shift into organic, evaluates Artjoki from The Ministry of Agriculture and Forestry. It is difficult to estimate profitability and plan ahead, if the subsidy system is not fully clarified.

Artjoki believes that farmers' interest towards organic production is on a good level, despite the bend. 95 per cent of organic farmers intend on continuing.

Alastalos are also content. Nothing could make Otto Alastalo return to regular production. According to him animals have been sick less often and calmer after moving into organic production. He believes that animals that are more content are "nicer to look at".

"This is more natural animal maintenance".