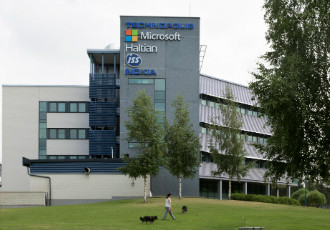 American software giant Microsoft is planning on cutting as many as one thousand jobs in Finland, two sources with knowledge of the plans told Helsingin Sanomat.

One of the measures under consideration is the shut-down of Microsoft's research and product development facility in Oulu, which concentrates chiefly on the development of software solutions for budget-friendly handsets and employs roughly 500 people.

Microsoft employees in Oulu are unruffled by the reports, a shop steward said on Tuesday. “At this point, we will not brood over speculation by outsiders. It would be a waste of our energy. We in Oulu have been through so much that speculation doesn't bother us,” Tiina Nortamo, a shop steward for senior clerical workers, asserted.

Microsoft, in turn, has stated that it does not comment on rumours or speculation.

On Tuesday, Bloomberg reported that the software giant may shed further light on its streamlining plans as early as this week. In a mission statement published last week, Satya Nadella, the newly-appointed CEO at Microsoft, contrastively said that the company will elaborate on its plans at its earnings call on 22 July.

Bloomberg also estimated that worldwide Microsoft may cut more jobs than the 5,800 it did in 2009.

Demand for mobile phones sold under the Nokia brand has declined sharply for three years in succession, ensuring that the handset business – acquired by Microsoft in late April – has been loss-making since 2012, despite considerable personnel cuts.

Sales statistics suggest that the outlook for the business remains bleak.

Between January and March, the shipments of Nokia mobile phones slipped by 15 million to 47 million devices, according to Strategy Analytics. In the smartphone market, Microsoft has fallen well behind market leaders Samsung and Apple.