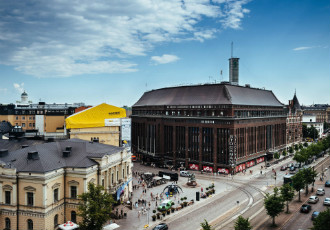 Harrods in London, KaDeWe in Berlin, NK in Stockholm and Stockmann in Helsinki – they are all ingrained in our history, department stores exuding luxury, in a league of their own; icons that over the years have become symbols of shopping, landmarks and tourist hotspots.

However, they also have their life cycle, and Stockmann, at the grand age of 152 years, is struggling.

The traditional retailer can blame the financial crisis, lingering recession, the popularity of online shopping and the volatility of the Russian rouble for its troubles. Unfortunately, it must also blame itself.

Stockmann is losing its share of the retail market. In June, the net sales of the retailer nosedived by 7.7 per cent from the previous year. This year, Stockmann forecasts, the sales will decline further.

No wonder Stockmann is devising a new strategy; the string of lay-offs introduced earlier this year is not enough.

Meanwhile, the retailer must hold fast to its traditions and quality, acknowledges Kaj-Gustaf Bergh, the chairman of the board of directors at Stockmann and the chief executive at Konstsamfundet, a major shareholder in Stockmann. “What makes this particularly difficult is that we're facing a tsunami and climate change at the same time,” he describes.

By climate change, Bergh refers to the digitisation of commerce and the migration of customers to the Internet. Tsunami, in turn, refers to the economic woes sweeping over Finland. Key to the future of Stockmann, Bergh says, is omni-channel retailing, a philosophy allowing customers to shop seamlessly across all available channels.

Customers no longer have to visit department stores because the same brands are available online at competitive prices, delivered straight to their front door. That is a challenge.

Yet, people still visit Stockmann, estimates Outi Uusitalo, a professor of marketing at the University of Jyväskylä.

Stockmann, she views, has thrived particularly due to its ability to make the department store important for its customers. The doors have been open for everyone, despite Stockmann's fancy reputation.

Stockmann has always been democratic, she summarises.

“It's notable that although Stockmann has stood for quality and been regarded as a rather expensive store, regular people have always been able to shop there, even in shell suits,” Uusitalo highlights.