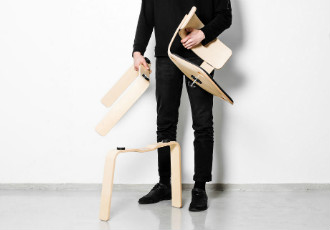 American designer portal Fab has acquired One Nordic Furniture Company, a Finnish maker of design furniture established by Joel Roos, for an eight-figure price, according to TechCrunch.

The price estimate quoted by the technology-oriented news outlet far exceeds the net sales of One Nordic, which are this year forecast to creep up to roughly one million euros.

Roos on Tuesday refused to disclose the price of the takeover. “The agreement prohibits me from doing that,” he explained over the phone from Berlin. “American companies are rather strict about these issues.”

TechCrunch also reports that One Nordic will take over a five per cent stake in Fab as part of the transaction.

Although Roos is not at liberty to comment on the price, he did reveal that the takeover is substantial in light of the sector in question. “The money doesn't compare to that involved in the sales of game studios, but I don't recall anything similar taking place in such a traditional sector in Finland for some time,” he said.

Roos established the furniture maker alongside Stefan Mahlberg three years ago with the intention of tackling the problems faced by online retailers of furniture. “From the beginning, our idea was to sell top quality, while ensuring that our furniture is very easy to assemble. Our principle is that anyone should be able to assemble a piece of furniture delivered to their home in less than one minute,” Roos elaborates.

“Meanwhile, the furniture must also be designed to be as light and simple as possible in order not to make the packages too big for online retailers,” he adds.

In the furniture business, One Nordic has been referred to as “the luxury IKEA”.

Roos on Tuesday also insisted that Fab did not acquire One Nordic for its revenue stream or profits but for its potential and expertise in design. In addition, the acquisition will enable One Nordic to develop its own design and manufacturing operations.

“Fab already has over 12 million worldwide customers, so this is a great opportunity for us and Finnish designers,” enthused Roos.