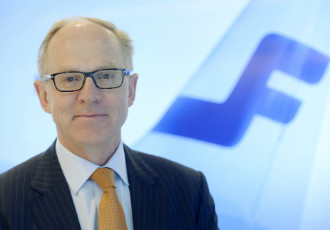 Finnair may not have reported a profitable first quarter since 2007, but this year the majority state-owned airline hit a new low, its first-quarter losses doubling from last year's 17.5 million to 34.2 million euros and its turnover contracting by 8.4 per cent to 543.3 million euros.

“The decline in turnover was affected by a slight decrease in overall capacity, continued strong contraction in leisure traffic volume, Asian traffic revenue decline mainly due to exchange rate fluctuations, and a decline in home market demand, particularly in business travel,” Pekka Vauramo, the CEO of Finnair, explains in a bulletin.

Between January and March, the demand for leisure traffic continued to wane as the market share of Aurinkomatkat, a subsidiary of Finnair, diminished and other travel agencies reduced their reliance on the fleet of Finnair.

Passenger volumes on leisure flights consequently fell by as much as 31.7 per cent in comparison to the previous year. The passenger load factor in leisure traffic, in turn, slipped to 87.1 per cent, meaning that 13 of every 100 seats on Finnair's leisure flights were empty.

Erno Hildén, the chief financial officer at Finnair, confirmed during the earnings call that unaffiliated travel agencies have notably cut back on chartering. “The exact figures will not be published. When the demand is modest, the declining demand is channelled toward own aircraft,” he pointed out.

The difficulties endured in leisure traffic, Vauramo explained, began last autumn, in the wake of the situation in Egypt. In addition, he blamed the difficulties on a number of general trends, including eroding consumer confidence and decreasing business travel.

Although Vauramo conceded that the synergistic benefits arising from the co-operation between Finnair and Aurinkomatkat have diminished, he affirmed that the airline has absolutely no intention to offload the travel agency.