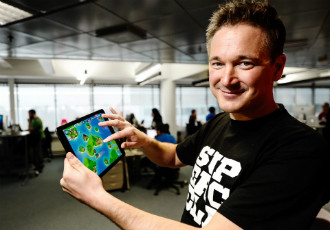 Boom Beach, the most recent game launched by the Finnish mobile game studio Supercell, is surging through apps charts following its release on iOS earlier this week. On Thursday, the strategy game ranked as one of the ten most popular iPhone applications in 22 countries, according to app store data analyst App Annie.

In the United States and Germany, Boom Beach was the fourth most popular iPhone app.

On iPad, the new title fared even better, ranking not only among the most popular but also among the top-grossing apps in five countries.

Boom Beach is a free-to-play strategy game not entirely dissimilar to Clash of Clans, the previous hit title of Supercell. Although Boom Beach is available for download for free, gamers can spend real money on in-app purchases to advance faster. The game has been available in Canada and Australia for several months as Supercell tested and refined the game for its global launch.

Ilkka Paananen, the CEO at Supercell, admits that the popularity of the game has been a positive surprise. “We're maybe surprised that it ranked so high,” he says.

On the other hand, Paananen reminds that early rankings are not as decisive for free-to-play games as they can be for traditional video and computer games, which generally strive to generate their profits early. Free-to-play games, in contrast, have a substantially longer lifespan.

“The objective is to create games for years and years to come,” Paananen explains.

Employees at Supercell are particularly pleased with the user reviews of Boom Beach, he adds.