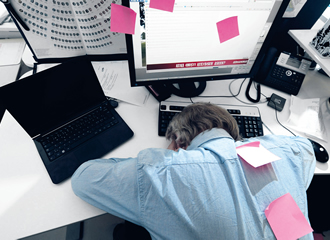 Recent studies reveal that perception of stress plays an important role in its effect.

TIME pressure, tight schedules and the increase of pace at work might not be the only causes of stress-related diseases. New research suggests that stress can also have a negative effect just because people believe it does.

According to the Institute of Behavioural Sciences at the University of Helsinki, stress has been misunderstood. “Stress is a positive state, meaning that it’s an adaptive mechanism which prevents us from getting into danger and prepares us to cope with challenges,” claims Dr. Laura Pulkki-Råback, docent.

Contrary to popular belief, stress does not inevitably lead us into sickness, and our negative perception of it might, in fact, turn it against our health. Recent studies by Harvard University reveal that participants who took stress as a positive sign had a more confident reaction to it. Biologically speaking, their anxiety did not increase, and so their risk of an eventual heart attack did not rise either.

When do people interpret stress as harmful? The interpretation of stress depends on the perceptions that people have towards the resources available to cope with daily and work demands, as Pulkki-Råback clarifies.

Other findings by the University of Wisconsin indicate that a strong negative perception of stress could also play a role in generating an unfavourable effect. The research found that participants who were convinced of stress as harmful for their health had a 43 per cent higher risk of death during the eight-year study period than those who did not have the same conviction.

The generally accepted view among researchers is that prolonged stress can have a negative impact on health.

“No-one knows exactly how long stress exposure has to be to have an adverse impact on health. It’d be safe to say that a couple of hours of stress or a few days is probably not too harmful, whereas stress that goes on for months or even years is,” states Katriina Heikkilä, Specialist Research Scientist at the Finnish Institute of Occupational Health (FIOH)

In addition, people’s vulnerability to anxiety needs to be taken into account: “People differ in their vulnerability to stress. That is why some people get sick from stress (e.g., develop a mental disorder), while others can handle even severe stress. Under similar stress-exposures, people react differently,” Pulkki-Råback says. “Different vulnerability depends on individual dispositions, like temperament, our genetic hardiness, and our prior experiences”