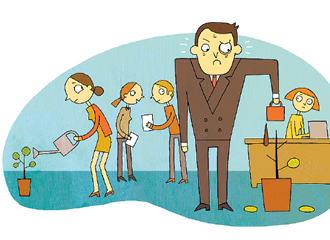 An incompetent boss thinks the whole organisation revolves around him and can also get away with his behaviour as the top management is not aware of it, or only cares about the company's performance figures.

After taking up a managerial position in an expert organisation, Kai soon realised the firm was led by an incompetent boss, whose behaviour and management style were unpredictable and whimsical.

"He wasn't clear about what the goals were and would often give several tasks to be carried out simultaneously, some of them contradictory."

Sometimes, having changed his mind about what should be done next, the boss would behave as if an earlier conversation had not taken place at all.

Kai also learnt quickly not to disagree with the managing director as this only resulted in revenge. Employees who dared to express an opinion that did not go down well with the boss would find themselves at the receiving end of the silent treatment.

On occasions when disagreements cropped up, the boss overrode all objections, without justifying his views in any way. "His attitude was that as he was the boss, his was the only opinion that counted."

Satu has also worked for a company where the managing director did not trust his employees to do their job.

"The boss wanted to know every last little detail. He'd get worked up if something was decided without consulting him first."

"He wanted to keep tabs on what employees were up to any given minute, not trusting them to prioritise their tasks."

Ari Rämö, a business leader and an author of a book on leadership, says that the experiences of Satu and Kai illustrate what leadership is at its worst.

With plenty of experience in managing organisations of various sizes, Rämö currently heads Sick Oy, a company providing sensors and sensor solutions, which has been elected among the top three workplaces in Finland several years running.

"A bad boss thinks that others are there for him. He doesn't realise that it's his job to motivate people and ensure good working conditions, not keep employees in their place."

A common problem in workplaces is a boss who does not allow subordinates to make decisions and ignores their opinions and ideas.

Janne Tienari, professor of business management at Aalto University, says that the list of management blunders also includes continual organisational reorganisations and bosses covering up for their own mistakes and over-emphasising their position and all the trappings that come with it.

Griping about bosses may be a popular coffee-break pastime, but dissatisfaction with business management's leadership skills is a topic that also regularly crops up in studies.

In a survey of more than a thousand 18-to-74-year olds carried out by the insurance company If in 2012, up to 39 per cent of people mentioned poor management as one of the problems plaguing their workplace.

Trade Union Pro found in its survey conducted in 2013 that 43 per cent of employees did not feel that the managers of the company they worked for were knowledgeable or showed great judgement. Roughly 10,000 professionals participated in the study.

Employees are often baffled by how unsuitable people can rise to top positions and manage to hold on to their jobs.

One explanation is that bad leaders appoint other incompetent managers.

"People tend to pick younger versions of themselves as their successors. It's fun to work with people who are similar to you," explains Tienari.

The company's top management is often blind to the situation as people are good at sweeping problems under the carpet.

Tienari also points out that, as in other things, beauty is in the eye of the beholder also in matters to do with business management.

"Subordinates may regard leaders as incompetent but from some other perspective the management style can seem successful."

"If the company's market position boosts business and increases its turnover, the upward trend can help mask employees' lack of motivation," says Rämö.

Satu assumes the top management of her company was none the wiser about her superior's behaviour.

"His own bosses were abroad and weren't aware of how unhappy people were. As long as figures look good, they are pleased with the way things are."

Kai believes that one reason behind poor leadership skills is that power is intoxicating and makes people blind to their own failings.

He thinks his managing director's rapid rise to high-powered positions is partly to blame for his narcissistic behaviour as it meant he had never been in a junior position himself. He had always surrounded himself by an inner circle that was at hand to carry out his orders and to fawn on him.

"I'm sure that people with such megalomaniac characteristics can be found in top-tier positions in all organisations. Then you get a boss who thinks he's the centre of the universe."

What are then the consequences of bad management?

According to Tienari, there may not be any consequences. "Others get used to covering up for management mistakes," he explains.

"People don't care and don't strive to improve things," Rämö remarks. "They just get through the days and do the bare minimum."

In Kai's company, the boss created an atmosphere of fear, pushing many to look for new work. Employees' work performance was evaluated solely on the basis of figures.

"People came up with tricks to make figures look pretty."

In the end, scared of garnering the boss's wrath, employees also manipulated the performance figures.

"You are given what you ask for. In an expert organisation, measuring quality is not easy but quantity can be measured and targets met also with bad quality."

Tienari is not as pessimistic about the quality of the Finnish business management as could be expected on the basis of surveys and coffee-break conversations, saying it is all too easy to point the finger at company managers when things do not go according to plan.

He stresses that leading a business is a demanding job, with teamwork required for good results.

He says that the level of leadership skills is generally high in Finland, with Finnish leaders being highly esteemed internationally and mentions a democratic approach to management as one of the positive features.

"Here, bosses can be criticised and challenged, which I think is a healthy characteristic. Finnish bosses are interested in what employees are doing and achieving in their work, rather than focussing on titles and family background."

Over the last decade, there has also been a clear improvement in management skills as education on the topic has become more common. "Business management is more professional these days, with people placing more emphasis on it, wanting to get better."

Even though in some studies, bosses get lambasted for their lack of leadership skills, there are also surveys that paint a different picture. The annual working condition barometer by the Ministry of Employment and the Economy reveals that transparent information flow and equal treatment of employees have improved in workplaces in the 2000s.

In the 2013 barometer, more than 80 per cent of employees said that their boss treated employees in a fair manner and asked for employees' views on matters that were relevant to their working conditions.

Almost three quarters of the respondents said that their boss was supportive when they wanted to improve their professional skills and also gave feedback on their work performance.

As nothing changed in Kai's company, he decided to resign after a few years.

"I decided against staying and putting up with the situation through gritted teeth."

And what happened to the boss?

Kai and Satu's names have been changed.