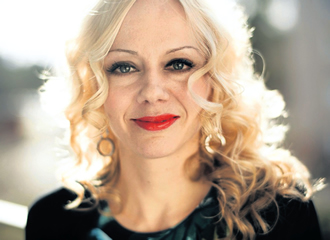 Paula Tilli is a lecturer and language enthusiast. She does not know how to clean her house or when the Second World War took place. She believes that forcing one into norms is the worst.

Snap, open the tomato sauce jar and boil the spaghetti!

Paula Tilli, who works as a nanny for an Austrian family, has announced that she is unable to cook but she will do her best.

As long as the lady of the house first reveals how to open the jar. Are its contents poured into boiling water? Or cold on the spaghetti? And how do you know when the spaghetti is ready? How does the stove work?

The instructions seem arduously complicated. She misses half of it, despite straining herself.

"A 20-something should be able to do this. How odd," madam snaps, and prepares the food herself.

Tilli considers it odd too. Why are things that are easy for some so difficult for her?

Four years later Tilli is provided with an answer. She has dropped out of university and is so tired from working part-time that she has not brushed her hair for weeks. The psychologist does not deem this entirely normal.

Asperger syndrome, i.e. mild autism, and attention deficit disorder ADD. This is the diagnosis that Tilli received in 2003 at age 24.

The characteristics matched. Limited routines, exceptionally strong interest in certain subjects, but also difficulty in learning other things and problems with communication – these are the Asperger features the psychologist listed.

"I had consulted a psychologist because I wanted advice on how to become normal. I was desperate," Tilli says.

Once again everything had gone awry.

After Austria, Tilli had moved to Stockholm to study to become a teacher of German and French. She enjoyed being abroad. There her quirky habits were often equated with being foreign: the Finn likes to be on her own and eats the same take-out food every day. She probably just misses home.

Tilli decided that life in Sweden would be different. She would no longer be lazy. She would focus in class, get good grades in subjects other than languages, and learn how to pay the bills and clean. If you try enough you will succeed. This was what teachers since elementary school had said.

Six months after beginning her studies, Tilli was so tired that she could not get dressed for university in the morning. Her home was a mess because she could not figure out where each object was supposed to go. She ate popcorn and crisp bread because they lasted. Sometimes even planning a shopping list was so exhausting that Tilli had to go to bed.

She told the university that she would not continue her studies.

"I was hugely disappointed that I could not perform normal tasks at an adult age. I figured that this was no way to live," Tilli says.

The psychologist agreed. Yet unlike Tilli had hoped, the psychologist did not give advice on how Tilli could adjust to work or studies. She suspected that regular work might not be possible at all. No one was supposed to get so intensely tired.

"I had imagined that everyone gets tired from work. And no one likes to clean! Then I was told that there are varying degrees. Yet others are still able to brush their hair even if they claim to be tired. And that cleaning did in fact strain my brains more than grammar. I do certain things manually that others do automatically. Cleaning involves a thousand stages and decisions: whether to choose a mop or vacuum, where to start, where to put things. I have to figure them out one by one."

Tilli received a diagnosis and soon a pension ruling.

"It was wonderful to hear that I was not dumb or lazy, but everything had a reason. Asperger is not a disease, but a different way to perceive and experience things."

Soon Tilli became angry, though. Why does it take a diagnosis for others to understand being different?

"I met a boy with Asperger who studied maps at home during the weekends, but friends and parents kept pushing him to go for football practice and evening activities. That is when I lost my temper. Is it more acceptable to drink during the weekend than study maps? I decided to write a book on Asperger and how I perceive the world through the eyes of a person with Asperger."

In Tilli's world no one should be forced to do things simply because it has been customary. One should not have to play with others if being alone is more enjoyable. They also should not be forced to eat at the table if it makes the child anxious. It is only a habit someone came up with! The most important thing is to eat.

"Why are the classmates laughing?" the 11-year-old Tilli wondered.

The boys had hit her during recess and called her ugly. At the cafeteria, bullies told Tilli to fetch them bread. She did. The whole table burst out laughing.

The teacher thought Tilli was too kind. Learn to defend yourself, the teacher instructed.

"I did not deem it odd that I would get bread for my bullies. The teacher had previously said that it is friendly to help others. According to my logic I would have been mean if I had not helped. I did not perceive the irony of my bullies," Tilli says.

Following rules was important to Tilli even as a child. She took everything literally. Now Tilli was confused: how does one know when to help? Why was she told to be kind, but when she did so it was suddenly wrong?

"People's opinions, modes of behaviour and body language are strange, and I could not fathom the thoughts behind them. It was as if I was in a strange country and I struggled to interpret others."

This is what the grown-ups missed. The teacher and school social worker instructed Tilli to join in on dodgeball and watch the same TV shows as the rest.

"Adults kindly thought that if I turned out like the others I would not be bullied any longer. I was an easy victim. I did not know who Madonna was or laugh at jokes."

Tilli considered watching TV boring and she did not understand the point of group games. She liked to spend recesses alone, and this concerned the teacher. To please the teacher, Tilli began to stand near a group of girls during breaks.

There were also problems in class. Tilli had learned to read and write at three years old. Based on this, the teachers thought she should have also learnt art and history.

"When I did not, I was considered lazy. At times the teacher got angry and yelled at me for not being able to insert the thread in the sewing machine. It made me feel bad because I often tried my best. I was told that if bothered to try I would be able to do it. I started to believe it myself."

The same continued in lower and upper secondary school. Tilli was good at languages – in high school she studied seven languages – but the events of the World Wars escaped her. Before an exam she would memorise facts. It often yielded a six. This was not good, but not bad enough to make someone question whether there was another reason behind her poor grades than laziness.

Many years were wasted. This is what Tilli thinks of school now.

"I learned nothing at school that I could not have learnt at home faster."

Tilli does not want to generalise on how schools should approach Asperger children. They are all different.

Homeschooling would have been most appropriate for her, for others it may not work.

If it were up to Tilli, she would increase the flexibility of comprehensive school.

"The strengths and interests of people should be better taken into account. Different subjects could be taught extensively in elementary school but it is worth questioning whether everyone should study everything. I studied history, physics and chemistry for years, but I still do not have knowledge of them. Instead I could have focused on the subjects I was good at and could have improved in."

At this point Tilli is often told that schools cannot be tailored to suit everyone's needs. Besides, one enters school to learn to be sociable.

"Why do people need to learn to be normal? I did not become normal at school. I learned that I am not normal."

Tilli is not bitter, though. She believes that she has received the best help she could get.

"Back then, neuropsychological diagnoses were not recognised. My psychologist worked hard to assure me that not everyone needs to know the details of the World Wars. The idea of me being fine the way I am seemed even provocative at first."

"These days I understand others through logic, but not emotion. I have learned that someone may get angry if I tell them straight away that I do not want them to visit because I do not have the energy to be with them for the entire weekend. Yet I still do not understand why being honest is worse than lying to my friends about being busy. Is it not fairer to be direct? The same applies vice versa. My friends know that a planned routine is important to me so that my plan for the day does not collapse. They understand logically why I burst into tears if my home assistant is replaced by another assistant. But they cannot identify with this feeling," Tilli says.

She has often wondered if it would be easier if Asperger were visible to others.

"I am often expected to know more things than I do. How do you explain to someone new that a normal looking and talkative woman such as myself is on pension and cannot clean her home, but needs an assistant? This provokes people. I am told I am well off for having an assistant to clean my house."

Since last April, Tilli has not explained her pension. She went back to working then. Tilli gives lectures on Asperger two to three times a week. Her audiences include doctors, psychologists, teachers, people diagnosed with Asperger and their close ones.

Someone always asks the same question: what should one do with an Asperger child?

"Accept them for who they are," Tilli says.

"Forcing one into a norm is the worst. Allow the child to read timetables at home if they enjoy it more than football. It is always worth trying, how else will you know what you will be passionate about? But no one should be forced."

Tilli no longer forces herself to conform to so-called normal behaviour, so that others would perceive her as normal. After class she collects herself by spending days at home by herself, eating the same breakfast, lunch and dinner every day, walking the same way in the park nearby and relaxing by reading grammar books. And she still does not care about not remembering how to prepare the tomato sauce.