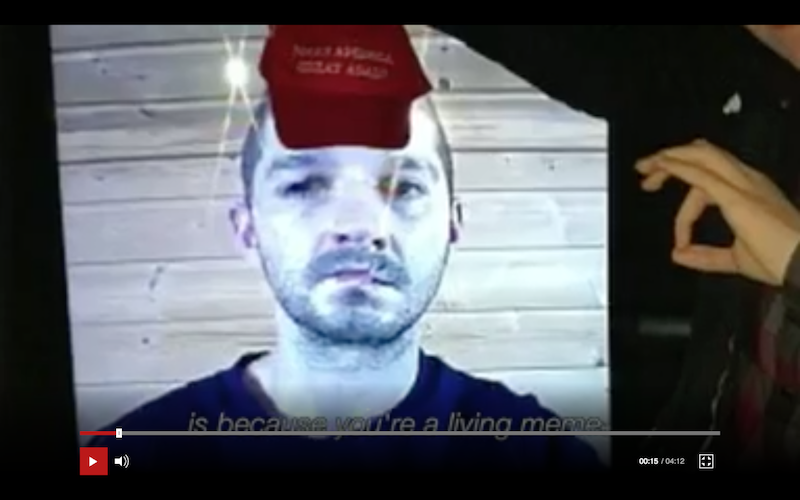 Actor and performance artist Shia LaBeouf has faced provocation by users of online forums during his #ALONETOGETHER exhibition at Helsinki’s Kiasma museum.

When Shia LaBeouf began his new performance art project in Finland, he most likely hoped that his problems with online trolls were over. Now it appears that his relocation to an isolated Lapland cabin hasn’t stopped his tormentors from springing up again.

Users of anonymous imageboard websites such as 4chan and 8chan began targeting LaBeouf during his previous performance art project, He Will Not Divide Us. This has now continued during #ALONETOGETHER, the current project that sees LaBeouf and his two collaborators isolate themselves for one month in three separate Lapland cabins.

The trio’s only communication with the outside world is through a livestream broadcast. Visitors of Helsinki’s Kiasma museum are able to speak to the three participants, but they can only respond via text message. The isolation of LaBeouf and his collaborators is now under threat, however, by users of the above forums. Members of the 4chan /pol/ community are trying to uncover the location of LaBeouf’s cabin and sabotage the project. The name for their “mission” is Operation Cabin Fever.

Posters on Finland’s equivalent of 4chan, Ylilauta, have also been quick to get involved. Using meme humor and pro-Donald Trump symbols, Ylilauta members have been provoking LaBeouf from inside the Kiasma exhibition. One user of Ylilauta told the BBC that their goal is to prevent the exhibition from lasting the planned 30 days. Kiasma has responded to the harassment and “hate speech” aimed at LeBeouf by increasing security.

Similar provocation caused LaBeouf’s anti-Trump project, He Will Not Divide Us, to relocate three times and eventually shut down. The project involved a 24/7 livestream that was broadcast from outside the Museum of the Moving Image in New York. Intending to give a platform to people who wished to share messages of resistance in opposition of President Trump, the project had to move to New Mexico after it was hijacked by trolls. Subsequent relocations to Tennessee and Liverpool, England weren’t able to fix the problem, and the project has now all but shut down.